The skills of artisans, the dining customs and the dining spaces are well established in Kanazawa. The traditional restaurants in Kanazawa are a good example of this.

The local Kaga Cuisine and the Japanese culture

Kanazawa has many long-established restaurants and businesses. The city's Japanese restaurants are particularly notable. They are very hospitable and offer authentic dishes, architecture, furniture, tableware and beautiful Japanese gardens. The Japanese and local culture can be enjoyed in all aspects when visiting a traditional Japanese restaurant.

The origin of the name "Kaga cuisine"

15 restaurants have joined the Kanazawa City Restaurant Association. "Tsubajin" is the oldest Japanese restaurant which operates in Teramachi since 1752. The first chef of Tsubajin was a cook for the local samurai. He started his first restaurant after his cooking skills were praised by the Lord of the Kaga Domain. Many other cooks opened their own restaurants.
The most important aspect of these traditional restaurant is their menu. Although Kaga is the former name of the region around Kanazawa, the name "Kaga Cuisine" has only been used after WWII.

The influences of the geographical location on the Kaga Cuisine

Kanazawa is located by the sea and the mountains, which provide many fresh ingredients. The plains are very fertile which result in good harvests of vegetables and rice. The entire population benefits from the location.
Kanazawa is located in the middle of the Kansai and the Kanto region. The first lord of the Kaga Domain introduces the culture of Kyoto to Kanazawa after he was appointed as the lord of the region by Toyotomi Hideyoshi. In time the samurai culture from the former capital Edo was introduced to the region.
Another well-known dish is the "Jibuni". A stew of duck meat, vegetables and wheat-gluten. The broth used in this stew is tasty and unique to the region. 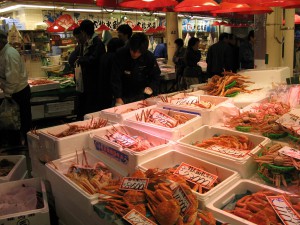 "Otomoro" is a long-established Japanese restaurant in Kanazawa. It is believed to be established by a cook of the lords of the Maeda Clan. Some of Otomoro's chefs became independent and started their own restaurants, which further spread the local food culture. It is commonly said that the people who dine in Kanazawa can taste the authentic meals the feudal lords used to enjoy.
Of course many of the dishes developed over time. Even the feudal lords didn't enjoy the sophisticated taste of the dishes that the people currently have. It is highly recommended to try these sophisticated dishes when coming to Kanazawa.

Many restaurants in Kanazawa attract good chefs from all over Japan. Many chefs come to Kanazawa to further train their cooking techniques.
Kitaoji Rosanjin was a famous gourmet and artist. He is one of the first to come to Kanazawa to learn about the local cuisine. It is believe that he was invited by a local merchant at the age of 32 to dine at a Japanese restaurant in Kanazawa. Impressed by the dishes and the atmosphere at the restaurant, Rosanjin continued to go to the establishment to learn from the chefs, their seasonings, arrangements and the harmony in the dishes and from their hospitality to the guests.
Rosanjin became a well-known Japanese gourmet after coming to Kanazawa. 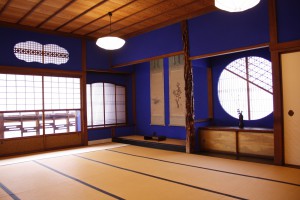 The local traditional crafts, such as Kutani Ceramics, Wajima Lacquerware, Kanazawa Lacquerware and Yamanaka Lacquerware are indispensable for the local traditional Japanese restaurants. Long established restaurants use artisanal tableware passed down from generation to generation. Many of these tableware items are works of art that add extra elegance to the dishes.
The restaurants carefully select the best artisanal dishes for the best presentation of their food. For example, steamed sea bream would be served on a large Kutani Ceramic plate and Jibuni would be served in a in a lacquered bowl. The chefs carefully select the dishes that match the presentation of their food the best.
The architecture of the restaurants is also important to the guest. Inside some restaurants there will be red oxide walls which reflect the Geisha tradition well. A more distinctive color loved by the samurai is ultramarine blue. This color is unique to Kanazawa. All aspects receive attention in these traditional restaurants; not only the architecture, but also the interior design, such as magnificent transoms, furniture or hanging scrolls that are changed according to the season or the occasion. The local restaurants are known for their delicacy in choosing their interior, their tableware and cutlery.

The restaurants divide their work well between their staff in order to offer the best efficiency and the best hospitality possible. The chefs cook, the waitresses serve, the receptionists greet. It is impossible not to notice the staff's attention to detail and the best timing to serve the dishes. They also take good care of the establishment and the gardens.
Geisha's can also attend dinner parties to entertain the guests at traditional restaurants. Ordering a geisha is the perfect way to experience top-class Japanese traditional performances and music.
These traditional restaurants used to be a place of social interaction for the upper class.

Traditional Japanese restaurants are often seen as exclusive places. Many of them used to be exquisitely for the upper class; an introduction was required to enter back in the days. Today, however, they are open for everyone.
Many traditional Japanese restaurants can be rested for weddings and other special occasions. The younger generation also finds this culinary culture to be an important asset of the Japanese culture.
Reservations are required at many restaurants. Some even provide accommodations.
Reasonably priced lunch menus are often offered for locals and tourists. They are much more accessible than back in the days.